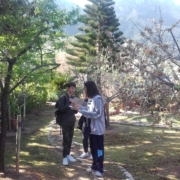 We took the bus in front of Joan Alcover’s door and everyone was very excited because it was a private one. After an hour of snoring and sleeping or dancing and screaming, we arrived to Deià.

The first thing I saw was the village between huge mountains  that looked like a giant wall protecting it. There were people from the village selling coffee and other things and after five minutes, we got to Robert Graves’ house. It was beautiful and very big and it had a precious garden with many trees and other plants.

First, we saw a video that explained Robert’s life and why he chose Deià to live. In the video he said that Deià is a perfect mixture of nice people, few politics and an incredible environment, and he was right!  After the video we did an activity related to Robert’s lifeline and when we finished we visited the garden. It was gorgeous, we had to look for some trees and machines as another activity and it was very fun.

After the first two activities everyone was very hungry, so we sat, ate our snacks and talked. Our break lasted about fifteen minutes and then, we entered his house. It wasn’t too big  but it had many rooms and at the top of the house there was a museum.

Our next visit was to the cemetery, where we saw Robert Graves’s tumb. It was a very pretty graveyard, and after visiting his grave, we read some poems that Robert wrote about war and love.

To end, we walked back to the bus and in less than an hour we were in front of Joan Alcover’s door again.

Viatge a Londres!
Scroll to top